On December 21–22, 2014, the Eumenides Project, under the auspices of the Open University of Cyprus and with the generous support of the Cyprus Research Promotion Foundation, organised an international conference on the reception of ancient Greek tragedy in Modern Greek theatre and literature (details on the programme of the conference can be found here). The conference, which was practically the culminating event of the Eumenides Project, took place at the Nicosia Holiday Inn. It included eleven papers by an international panel of scholars (Dimitris Tziovas, Roderick Beaton, Lorna Hardwick, Gonda van Steen, Michael Paschalis, Ioannis Konstantakos, Vayos Liapis, Anastasia Bakogianni, Maria Dimakis-Zoras, Demetra Demetriou, and myself).

The cutting-edge, thought-provoking research presented in the papers, the lively, civilised discussions and the great attendance, which exceeded all expectations, made this conference an unforgettable and fruitful experience for all involved. Indirect participation in the conference was made possible by way of a live tweeting service (you can get a taste of the tweets here or here). The presentations were also videotaped and they will be uploaded on YouTube very soon. The proceedings of the conference will be published by an international publisher at a later stage.

In what follows we provide a synopsis of the proceedings, as it was presented at the conclusion of the conference earlier today. 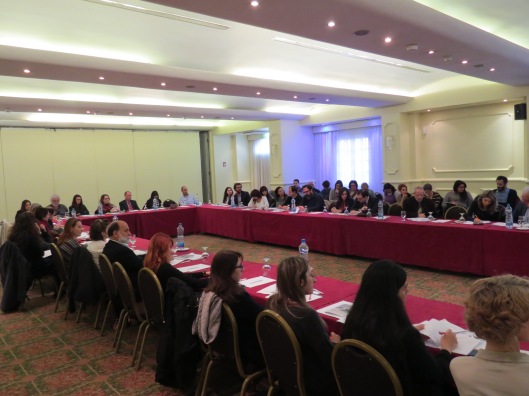 As our Eumenides conference draws to a close, I think we can be fairly satisfied with its academic results. The conference displayed a good balance of topics and approaches to some of the most important writers that tackle themes, motifs and characters from ancient tragedy. It also displayed significant chronological scope, from texts written before the institution of the Modern Greek state to others written in the last decade and even plays that have been performed but not yet circulated in book form.

We began with two methodological papers in Session 1: 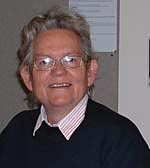 Lorna Hardwick (British Open University), whose paper was read by Dr Maria Pavlou, the Eumenides research associate and the heart and soul of the conference’s organisation, asked a number of important theoretical questions, the significance of which was exemplified in various of the subsequent conference presentations. Assessing the aesthetic and cultural conflict between transmission and transformation, Hardwick distinguished between linear (or ‘one-way’) and multidirectional (or ‘two-way’) modes of reception arguing for the primacy of the latter. Using as a case study the interaction between Cavafy, Mahon and Longley, Hardwick underlined that unidirectional models, such as appropriation and legacy, which locate power in either the ante- or the modern text, are not satisfactory on their own. In the reception process, spatial and temporal interactions between various texts unleash multi-directional semantic energies, which the reception scholar must reckon with. Receptions intersect and cross-pollinate in a variety of intricate ways.

Dimitris Tziovas (University of Birmingham), too, analysed the receptive models of homage, appropriation and dialogism. The first, he argued, now an obsolete notion, privileged the ante-text, whereas appropriation shifted focus onto the modern writer re-imagining the past. Tziovas agreed with Hardwick that the dialogic mode, which calls for a more interactive mode of reception (and reception analysis) illuminating both past and present, is the most fruitful. However, he countered, whereas the reception of the past in literature is in most cases dialogic, in the instances where the past is put to other uses, for instance ideological or political, the model of appropriation is the one usually resorted to by poets and the one scholars should not underplay in their analyses.

Ritsos, Seferis and Charalambides, the three poets included in the research interests of the Eumenides Project, were the ones featured in the conference. Two papers on Seferis were the focus of Session 2:

Roderick Beaton (King’s College, London) pointed out the marked difference in the treatment of myth dividing the English-speaking modernists and George Seferis. Whereas the English modernists appealed to myth as a universal currency, Seferis attempted to ‘repatriate’ classical, indeed tragic myth, in a kind of metaphorical nostos. Seferis, Beaton argued, did not believe that myths translate easily from culture to culture. Poem 1 of Mythistorema enacts the process of recovering this supposedly redeeming power of myth from the ‘futility and anarchy’ of modern history, by seeking very specifically the ‘primal seed’ from which ancient drama, in its original historical context, had once blossomed. Seferis, however, opts for the re-enactment of the vital processes at the heart of ancient tragic drama, not for the passive revivals of ancient performances. The products of uncritical imitation are worthless for Seferis. Myth will not be regenerated by imitating the external form. It is not the imitation of tragedy as form that matters, but the rebirth of myth naked as a living, organic process. 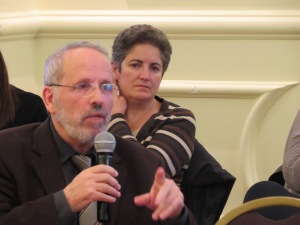 Michael Paschalis (University of Crete) approached Seferis from a different point of view illuminating the poet’s creative processes. Taking advantage of first-hand research in Seferis’ personal library, kept at the Vikelaia Library of Herakleion, Paschalis described in minute detail Seferis’ interaction with classical scholarship, specifically with the works of Paul Vellacott and Arthur Winnington-Ingram, in the composition of his poem “Pentheus”. The same scholars were also instrumental in Seferis’ understanding of Euripides’ Bacchae (a play which he abortively attempted to translate) as a play “about mass hysteria and a repressed man”. Seferis’ almost scholarly thoroughness in researching potential sources of poetic inspiration provides a good illustration of the modernist poetic process at large.

Ritsos was also graced with two papers presented in Session 5, both focusing on dramatic monologues from the “Fourth Dimension” (1972): 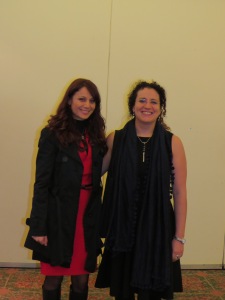 Anastasia Bakogianni (on the right) with Maria Pavlou (left)

Anastasia Bakogianni (Institute of Classical Studies, University of London) examined the reception of Electra in the monologues “The dead house”, “Under the shadow of the mountain” and “Orestes”. Ritsos’ Electra, Bakogianni shows, is a survivor of war trapped in the limbo between the stagnancy of the present and the shadow of the past, burdened by an unquestioning reverence towards the past, which, unless she breaks free from it, is bound to crash her. Ritsos’ Electra, Bakogianni argued, is one of those ghostly relics of troubles past, who can only serve the cause of progress by way of their demise. Ritsos’ Electra-personas are survivors of the wars that plagued Greece throughout its long history. They are haunted by death, loss and the ghosts of the past. These modern survivors eventually must be exorcised and their reverential attitude towards the past must be cleansed.

Demetra Demetriou (University of Nicosia), utilising postmodern feminist theory, talked about Ritsos’ dramatic monologue “Ismene”, in which the poet, rewriting Sophocles’ Antigone, exposes the construction of femininity in the cultural and political context of the Greek Junta and Soviet totalitarianism. Ritsos re-writes Antigone entirely from Ismene’s point of view. Gender provides the source of conflict in this monologue, Demetriou stressed. Borrowing on Sophocles’ conflictual universe in order to enact two radically contradictory variations of “womanliness” (Ismene and Antigone), Ritsos puts forward the theatrical construction of (sexual) identity and raises significant issues, which relate to the functioning of power. By signaling new ways to rethink (female) subjectivity, Demetriou argued, Ritsos dramatizes the committed writer’s inner crisis toward the quest of alternative configurations of identity – be it sexual, social, national, ideological, or aesthetic.

Cypriot poets could not be absent from the fold, especially since one of them at least, in my humble opinion, is the strongest poetic voice writing in Modern Greek in the post-1974 period: 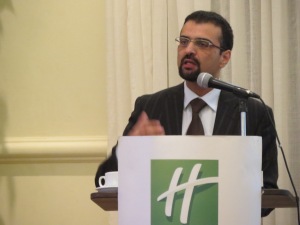 Antonis K. Petrides (Open University of Cyprus) focused on Kyriakos Charalambides’ dialogic engagement with Aeschylus but mostly with Aeschylus’ legacy as filtered through the works of major modern authorities, such as Cavafy and Seferis. We were truly blessed by the fact that the poet himself was present in this presentation offering his own invaluable point of view. The interstices between the readings of a philologist working in a library and the creative artist himself, who experiences his work more viscerally, first proved that scholarship itself is a precarious reception process! Furthermore, however, they established the dynamism of poetic texts, which can never be reduced to stable, univalent meanings, but always open themselves up to semantic plurality and expansion. “My greatest ambition”, the poet told me later, “was one day to be able to create poetic words that can unleash nuclear semantic power”. I think he has certainly achieved so much. 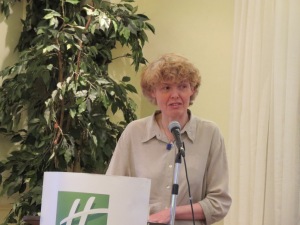 Gonda van Steen (University of Florida) returned to the beginnings of Modern Greek theatre presenting Demetriades’ Xerxes or Persians (1805), a piece of theatre promoting the revolutionary, nationalist agenda and assimilating ancient material from Aeschylus, Herodotus and Plutarch through the crucial mediation of Metastasio. The play’s orientalist notes underscore Greek self-congratulation and victory celebration at a time when the Ottoman Empire or the perceived ‘sick man of Europe’ was on the decline. The play’s melodramatic bent fuses the Aeschylean subtext with the love intrigues and convoluted plots that were current in Demetriades’ day.

Ioannis Konstantakos (University of Athens) in his turn centred on Pavlos Matessis, one of the foremost Greek playwrights of the 20th-century, and his emblematic work Towards Eleusis (Προς Ελευσίνα), which, he argued, must be read in unison with his equally momentous novel Ο Παλαιός των Ημερών. Matessis’ play created a dense web of allusions to ancient mystic rites and myths (not only the Eleusinian Mysteries, but also Dionysiac religion and other similar forms of religious expression). This complex and powerful mix amounts to a genuinely modern Greek tragedy, which offers an original vision on life and death. 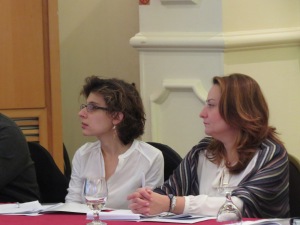 Maria Dimakis-Zoras (on the right)

Maria Dimaki-Zora (University of Athens), in a joint paper with Theodoros Grammatas, turned her attention to contemporary, experimental theatrical performances (plays by Akis Dimou, Anna Margaritis and Avra Sidiropoulou — our OUC colleague, might I add!) re-imagining ancient female figures, such as Medea, Electra and Clytemnestra.

Last but not least, Vayos Liapis familiarised us with an as yet unpublished piece of dramatic literature, Marios Pontikas’ play Neighing (Χλιμίντρισμα).

In this play, classical antiquity is not evoked as a quasi-transcendental authority. It does not validate or ratify; rather it provides the starting point for a dangerous and often subversive reflection and self-reflection. Neighing engages with tragic myth in order to deconstruct it. Everything in Pontikas’ play — including space and human speech itself — is treated with the aesthetics of post-dramatic theatre under the influence of the director Theodoros Terzopoulos and Heiner Müller. Everything in Neighing balances precariously in a state of existential abeyance. Pontikas’ play is ultimately about the negation of articulate speech and the invasion of natural space by the paradoxical. It is about the eclipse of all our complacent certitudes and of our self-admiring perception of humanity as the natural crown of creation. Greeks usually turned to tragedy with a view to legitimating their own claims to canonicity: this way the authority of tragic myth, as a structure based on legitimising assumptions, can be turned into a hegemonic tool. What Pontikas does it to resist, even to challenge this politics of appropriation. By ceaselessly lampooning humanist approaches to antiquity, Pontikas launches an assault against our lazy assumptions and smug certainties. It is as if Pontikas wants to shout: “Down with the Greeks, we have had enough of this humanist nonsense!”

7 thoughts on “Our heroic debate with the Eumenides: a synopsis of the conference”

This site uses Akismet to reduce spam. Learn how your comment data is processed.

Check out my latest book